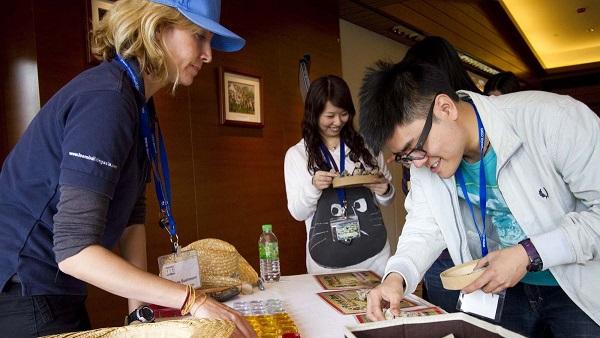 In November 2009, IHG engaged Team Building Asia to top off their annual Greater China Leaders’ Meeting with an afternoon of fun interactive team building activities that will assist in reinforcing the conference key messages.

Held at the Crown Plaza Suzhou, teams of Vice Presidents, Regional Directors, Regional and Area General Managers completed Bean Around the World and Bridging the Divide.

The first session of the afternoon consisted of the high energy, collaborative icebreaker called Knowing Me, Knowing You. Delegates were encouraged to meet as many colleagues as possible, discovering things that they have in common. Numbers of people met were then tallied up resulting in winning teams and individuals.

During the Bean Around the World activity, teams worked as coffee syndicates, buying and selling coffee beans for the highest profit. After receiving specific instructions and market information, the room was abuzz with energy as teams discussed the best strategy, negotiating and trading with other teams.

At one point during the game, a change element was introduced, forcing team to quickly adapt their strategy, resulting in more frenzied negotiations. A suspenseful auction was fought out between two teams to grab the last supply of precious coffee beans.

What had seemed like a purely competitive activity atthe beginning, revealed itself to be an exercise of unified vision and competitive collaboration as the syndicates’ money and coffee were tallied, and the syndicate with the highest value winning the exercise.

After a well deserved coffee break, teams discovered their next challenge – Bridging the Divide, where they were tasked to work as one organization to build a giant circular bridge out of cardboard.

Teams were assigned specific parts of the bridge. They were given instruction manuals, the materials and tools required to build their respective portions. Various roles were quickly assigned and resources assessed to ensure a building plan was clearly drawn out. This was crucial to the success of their bridge as each individual team would specify the plan for their portion but another team will have to build it!

For an hour, teams communicated their plans and collaborated with each other on building adjoining portions to ensure all sides match up – not an easy task when the bridge was purposely designedwith angles and elevations!

Teams made full use of communication tools available like “Email Inboxes” and “Call Centers” to exchange data, clarify and verify information.

As the deadline drew near, teams hurriedto clarify final details and addedfinishing touches to the portion of the bridge. At delivery time, teams broughttheir finished portion to the“client” who verifiedthat it had beenbuilt according to plans. Excitement mountedas the bridge was assembled and laughter eruptedas some portions didn’t turn out as expected.

After a short debriefing session to share experiences and key initiatives from the afternoon’s activities, teams came back into the room to test the bridge structure. The Managing Director of IHG Greater China was given the honor to drive remote controlled truck on the bridge. Cheered on by the delegates, the truck successfully madeits round withsounds of excited cheers and laughter.

As a souvenir signifying what can be achieved by working together towards one unified goal, delegates posed for a group photo with the magnificent circular bridge. In line with TBA’s Green Charter, the bridge was then disassembled and the cardboard recycled.

“Team Building Asia took the time to fully understand what we were trying to achieve so they could build a program that would fulfill our aim. Their experience with IHG ensured that the activities were customized to our mission and values. The delegates had a good time networking and practicing new ways of working together towards one vision. The facilitation was excellent, which ensured the afternoon to be enjoyable and memorable for all. We're really pleased with the results and look forward to building our relationship with TBA in the future.”